I have made it a part of my daily routine to read, listen to, and understand what is really going on in my country, the United States of America. What is happening here parallels what is taking place in virtually all the historic lands of Western European decent – Great Britain, Canada, Australia, Germany, Scandinavia and so forth. This is a time of increasing chaos, destruction, threats, and intimidation ranging from fake virus news, lock-downs, mandatory restrictions, continuing subjugation of the middle-class economy, and the present and future devastating fallout from that reality.

Voices from military leadership, billionaire oligarchs, and elected and unelected officials are channeling their message narrative through their chosen and exclusive media sources in order to overthrow the countries of Western civilization, biblical Christianity, and the rule of fundamental law. Now, we are hearing of plans for a coming coup against the People and the elected sitting President of the United States. (You may want to check out a well done, yet sobering video presentation at the end of my post today.)

I expect increasing chaos and conflict from now until the November election and beyond. I hope that this is not the case, but everything I have witnessed since March 2020 until the present reveals that things are intensifying. All the information makes my head swim. It is an unstable time.

If I were to capsulize this increasing conflict, I would conclude that it has its roots in theology. That may seem a bit strange and surprising to hear, but at the end of the day, everything has its source in a theological viewpoint. This is why theology is so critical in order to discern the truth and the lie. 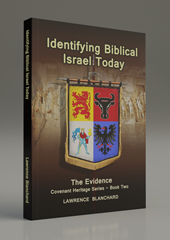 The events of the Covid-19 “plandemic,” the BLM and Antifa rioting, and the intense and irreconcilable division in politics now manifesting are the result of a well-organized Communist effort based on the theology of Judaism. (I discuss some of the evidence of this in Identifying Biblical Israel Today, Book Two.)

The theology of Judaism seeks to achieve its purpose and mission through various ways and means such as economic control (International Monetary Fund and World Bank), political control (United Nations), and health care control (World Health Organization which is presently dictating health policy in the United States and other countries). Through agreed to treaties and foreign constitutions, almost every government has now volunteered (or been coerced) to come under international jurisdiction and is thus subject to top-down control. (Check out the second link at the end of this post to the reality of what is coming to totally control your lives.)

The outcome of the theology of Judaism is what has been quietly established for decades past and is now boldly manifesting itself in and through the evidence of a massive set of lies and censorship of truth by a Jewish-controlled media, creating chaos and destruction at every turn. Of course, it is not just many Jews who are behind all this, but other races including some White people who gladly align themselves with this Judaistic theological kingdom. It is advancing at an accelerated rate.

In contrast to the theology of Judaism, biblical theology describes another Kingdom. This Kingdom has Jesus Christ as King reigning over His Covenant People. These People are not the biblical Jews of today, despite popular notions to the contrary. Ultimately, the Kingdom of the Living God has the intended outcome of love, justice, order, and peace. That is not what we see today. But why?

It is a puzzling question to many because, at least in the United States, we have in existence many churches and organizations that claim to be sourced in biblical theology. Some of these churches today openly identify with the theology of Judaism and Marxism and yet call themselves “Christian.” That is one excuse as to why we feel overrun with an out-of-control Communist movement. But how about all the other “evangelical” and “conservative” churches? Apparently, they don’t seem to really have an effect or influence to answer the serious challenges of our time either. The United States was once considered a Christian county. No longer.

Could the answer be that the conventional, conservative theology cannot altogether be defended, biblically speaking? Could it be that mainline conservative Christian theology is actually, though unwittingly, teaching and promoting some of the theology of Judaism?

In the Covenant Heritage Series, I present a comprehensive theology step-by-step through the entire Bible which contrasts and challenges the major theological assumptions commonly taught by professing Christianity today. In this Series, I outline the biblical solution for our time.

In addition, we have developed an interactive video teaching and training series that does the same thing called the Bible Mastery Book Camp. You can use it individually, or as a couple or family, as a home school Bible course, or for a small group study.

The answer to the ongoing upheaval of our lands leading to our destruction lies in verifiable biblical theology, history, and science. Once that is understood, you are ready for the solution.

By the way, if you are not aware, there is a wonderful opportunity for you to attend a Bible conference coming up October 9-11 in Houston, Missouri hosted by Pastor Everett and Linda Ramsey. The gathering will feature seven speakers (including myself) who will be preaching about and addressing our present national crisis.

There will no need to wear masks or practice social distancing! Instead, we are going to have a good time of studying the Word of God,  fellowshiping, and singing with one another.

If you are thinking about attending, you need to call 417-967-2011 or 314-814-1148 and talk to Linda about registering for the conference. You must register with Linda in order to attend. The conference is only 3 weeks away and registration and lodging are limited. To date, there are well over 200 people attending and more are calling every day!

So, make your reservation today. I hope to see you there.

Next Up: Confronting Evangelical Christianity Today