Many more White People in America, as well as in all the other countries of the descendants of the northwest Europeans, are discovering they are the target of a new world order system. I would describe it as a war against Whites, specifically to disrupt, dismantle and destroy the White race, the countries of their ancestors and their historic civilizations. 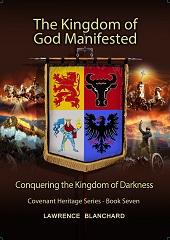 In my upcoming book in the Covenant Heritage Series, The Kingdom of God Manifested: Conquering the Kingdom of Darkness,  I write about this war with its many fronts and document everything. But then I discuss what the written Word of God reveals in regard to His purpose and plan to defeat this international racketeering system.

One of the main avenues used by the new world order to subjugate the White People is the false, unlawful economic system based on interest-bearing notes and electronic (invisible) “money.” This is the “essential engine” of the Marxist / Communist global government system. Practically, we are at the mercy of the reserve banks of the International Monetary Fund (The Fund) and the World Bank (the Bank). An exclusive small set of banking cartel families have complete dictatorial control to extend credit, limit credit or close down credit. Without their credit, there is no “money.”

This banking cartel controls whether we prosper or starve. They use their economic system to force governments to dictate policy (like Agenda 21) and create military conflicts and wars (like the War on Terror).

Additionally, this “essential engine” creates unending, perpetual debt of which there is “no mathematical solution.” As such, “the borrower becomes the lender’s slave” (Proverbs 22:7). Which is especially true in this debt/credit system.

Enslavement of the White race is enforced through policies of foreign non-White immigration into White countries. A marked increase in crime and economic burden on White People is the result. This has not gone unnoticed by the White Americans as well as those in other White countries. One of the major reasons Donald Trump was elected as President was based on the promise he would stop “chain migration” and build a wall to protect our southern border with Mexico. This has been met with fierce opposition, especially by the democrats now controlling the House.

What else has not gone unnoticed by an increasing number of White Americans is the extreme prejudicial war directly against the White race itself. Examples of this abound overtly and covertly.

Recently, in a nearby city where I live, a baker created a variety of cookies for Valentine’s Day. One of the cookies had “BUILD THAT WALL” written on it. The media got a hold of that because some local Mexican gal got offended. So, the media interviewed her and she ranted about how something like this could be turned into a “hate” and “racism” thing if any “White Supremacists” or the “Alt-Right” White people knew about it. Of course, the media interviewed the baker and he had to “apologize” if he offended anyone and that the cookie in question was just for fun – racism wasn’t his intent – blah, blah, blah. The politically and racially correct police were out in force. It makes me sick and angry, but it goes to show that White people are targets. Only they are racists (whatever “racist” means).

The YWCA’s website states that “members of ‘Witnessing Whiteness’ will explore the ‘history and construction of white racial identity,’ ‘white culture and values,’ ‘manifestations of white supremacy and privilege,’ and ‘activation of white solidarity and accountability.’”

“…people of color shouldn’t always have to be the ones to educate white people about racism and oppression,” “white people need to unlearn racism,” and “it’s a place where white people can begin to build a new culture of white anti-racism.”

A very subtly facilitated “White guilt” program. I would love to be in that discussion!

But, do you see it? This is just another brainwashing war tactic.

So, can we effectively balance the playing field? I think so. I think these young White people would welcome an opportunity to get educated about their biblical heritage and what the Bible actually says about race.

That’s why I wrote the Covenant Heritage Series and am working on the soon release of the Bible Mastery Boot Camp. But I can’t do it alone. Many others who realize what is going on out there must start talking about the truth of the matter. Friends, neighbors, co-workers, fellow students, and of course, family. I offer tools that can be used, but you are the ones who can sow the seeds of truth. Do we really have any choice not to?

Let’s all continue to be educated and informed and take advantage of those opportunities to witness for the truth.