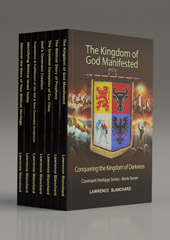 Is there a God-ordained, biblical answer to an ever-advancing, global, tyrannical force that is intent on enslaving and destroying the Covenant People of God? Yes, that is my conclusion from my personal study fleshed out in my books (the Covenant Heritage Series).

Is that answer simple and straightforward to understand? Yes.

Is it possible to actually implement and realize this answer in our time? Yes.

Can you play a necessary and effective part in the solution to challenge and conquer the well-coordinated matrix of wickedness – the kingdom of darkness? Yes.

If you are interested in participating in that plan, please read on.

Just in case there is any doubt that this global power can be defeated except by God’s revealed plan, let’s be clear. Trying to change “the system” from within through politics – like signing up more people to become Republican voters, or writing your elected representatives, or protest marches – isn’t going to work. As we have already experienced in the recent election fraud, this will just be wasted effort that goes nowhere. From top to bottom the whole system is rigged.

We had four years of The Donald, hoping he was the champion who could change the course of the ongoing destruction and challenge the so-called “deep state.” The result is that $12 trillion more has been added to the already massive debt, we are in an economic free-fall, and a lethal biological weapon (called COVID-19 vaccine) is now being used to destroy our People.

Perhaps we need to realize that no matter who is in office, Trump, Biden or whoever, the same devious players still control behind the scenes. Whether global or national or state, the same dark characters continue to march forward to bring us all into “the system” toward complete tyrannical subjugation. Consider what happened in Communist Russia alone in the 20th century and the tens of millions of White People slaughtered. How about the devastation of WWI and WWII? It was all contrived by the same Canaanite brotherhood worshiped by the vast majority of churches out there.

Apparently, we haven’t been able to stop it yet. It hasn’t gotten any better, has it? And Jesus has not come back to rescue us in a blazing display of glorious power as so many believe will happen in the near future. 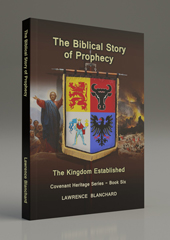 In case you think that I am taking away any remaining hope from you, I have good news. He has already returned and is waiting for us to take our position as warrior kings and priests so He can begin to work in and through us – NOW!

Hey, it’s been 2000 years since the first century AD and many generations have thought that Jesus Christ would return in their lifetime. Perhaps it’s time to take another look at biblical prophecy.

Many would scoff at such an idea, but I have to ask: What if He doesn’t come back in 3 years? 5 years? 10 years? 20 years? At the rate things are going, what’s it going to be like for your children and grandchildren? By then, it will be too late. I have no doubt that some will move the goal posts again and proclaim that this time He is coming for sure. Just around the corner. And they sit and wait and do nothing.

While you are waiting, do you think that our God would be disappointed if we got a hold of His plan to begin to address and effectively implement it now? As a matter of fact, what I observe is that our God is already showing us that the present circumstances are forcing His People to come together locally.

I have mentioned it before numerous times and will say it again: the God of our fathers has allowed the present circumstances to compel His people to come together locally. The main motive is for survival in the midst of a relentless oppression of all manner of restrictions that suppress the ability to live relatively normal lives. The “pandemic” lies and fear are causing increasing personal and societal harm to the point, in some cases, of suicide. To survive, people have no choice but to try to form local support groups.

Could it be that God is using all these events of our time trying to move us in a direction to fulfill His plan of local church fellowships? I am not referring to the typical concept of a go-to-Sunday-meeting church. I mean what God has already explained in Scripture – an interactive, interdependent community of “called out” Christian Israelites who deliberately form a body politic based on the written Word of God. This is a community idea central to all aspects of living from the moral and lawful to the practical (land, water, food, healthcare, carpentry, mechanics, plumbers, and so forth).

Do you want to defeat and conquer the powers of darkness? Take a look around and see what is happening and start thinking. The movement has already started!

I ran across an article written by Annie Holmquist entitled, The Neighborhood Stands Between Us and Totalitarianism.1 Let me pull out a couple of pertinent quotes:

Anticipating the bleak prospect of a Minnesota winter with limited social gatherings, my neighbors decided to rally those around them for a time of encouragement. Neighbors who have waved at each other for years came together for a few evenings to actually solidify each other’s names in the recesses of memory.

Huddled around the fire, my neighbors dove beyond names, and began to tell about their pasts and how they reached their present states in life. Soon these perfect strangers were having deep, meaningful conversations with each other. . .

To explain this connection between neighborhoods and the fight against totalitarianism I turn to Robert Nisbet’s classic work, “The Quest for Community.” Getting rid of the individual is one of the most visible goals of totalitarianism, Nisbet explains. In actuality, the undermining of the individual starts earlier with the dissolving of community structures (such as neighborhoods) and relationships:

“We may regard totalitarianism as a process of the annihilation of individuality, but, in more fundamental terms, it is the annihilation, first, of those social relationships within which individuality develops. It is not the extermination of individuals that is ultimately desired by totalitarian rulers, for individuals in the largest number are needed by the new order. What is desired is the extermination of those social relationships which, by their autonomous existence, must always constitute a barrier to the achievement of the absolute political community.” . . .

“Totalitarianism has been well described as the ultimate invasion of human privacy. But this invasion of privacy is possible only after the social contexts of privacy—family, church, association—have been atomized. The political enslavement of man requires the emancipation of man from all the authorities and memberships….”

The neighborhood, it appears, is the last acceptable bastion of association with others … so why not take advantage of that?

Hold a bonfire like my neighbors did, where a handful of people can get together and discuss ideas or needs.

Make religion and faith part of the conversation. It was once impolite to discuss issues of faith in public society, but the game has changed everywhere, and the closure of many churches has left many people without an outlet to consider the all-important topic of God and our purpose in this world.

A lot of wisdom here and I commend her entire article to you. But did you see the vision and get some ideas? People are coming together. Take advantage of this opportunity.

And, by the way, do you understand why we are told to lock down, practice social distancing, and wear masks? Do you think this is all about the “virus”? No, it’s to keep us from gathering together. That’s the plan and they know what they are doing.

Take the recent growth uptick in homeschooling. Consider the latest research on this subject.2

There are an estimated 4.0 to 5.0 million homeschool students in grades K-12 in the United States (or 7% to 9% of school-age children).

It is estimated that over 9 million Americans had experienced being homeschooled as of February of 2020.

I think folks are seeing what is out there and what is coming. The “system” leaves them with practically no viable options except to take matters into their own hands.

The local Covenant Church assembly is the perfectly equipped body to function interdependently and with governing authority. It is the temple of the Living God (Ephesians 2:19-22). With proper leadership and correct teaching (doctrine) and a covenant commitment to manifest the Kingdom of God locally as a body of the Covenant People, the local church assemble cannot fail. Why? Because the presence and power of Jesus Christ Himself is operative in and through His body. This is what I discuss in Book Seven of the Covenant Heritage Series.  But you must begin with a foundation first (Books One-Six).

Today, we find ourselves in a desperate position. Do you realize that? What we are now experiencing as His People in all their historic lands globally reflects the curses of Deuteronomy 28 promised by God to a people who have forsaken the God of their fathers.

Warnings of greater adversity are being announced. Activist Peggy Hall of The Healthy American sums up what is ahead for us unless we start implementing God’s plan.

Could you imagine a world...

Where you are denied entry to the grocery store, bank or dentist's office, just because of your bare-faced appearance...

Where you are fired from your job because you do not consent to a forced medical experiment...

Where you are sued by the government simply because you kept your business open...

Where you are arrested for trespassing because you are simply trying to put food on the table...

Where your children are forced to either self-suffocate to attend government schools -- or park themselves for hours in front of a computer screen, isolated, frustrated, despairing...

Where your aged or ill loved ones are "kept safe" by isolating them from you, until they die, prematurely, alone and afraid...

Where the simple act of breathing oxygen is an act of defiance...

This is what I call the sea of evil.

And I refuse to swim in this evil sea.

I have never worn a mask, and I never will.

I do not comply.

There are many sacrifices I have made.

People I have not seen.

Places I will not go to.

Activities I have given up, unwillingly, agonizingly.

But I will not comply.

The prophetic future depends on one of two choices. Just as Moses told our ancestors:

"I call heaven and earth to witness against you today, that I have placed before you life and death, the blessing and the curse. So choose life in order that you may live, you and your descendants, by loving the LORD your God, by obeying His voice, and by holding close to Him; for this is your life and the length of your days . . ." (Deuteronomy 30:19-20).

God’s answer and plan is before us. Choose life!