I have waited until now to discuss the George Floyd incident and its ongoing aftermath. I felt that, perhaps, there was more information coming that would clarify what actually happened and why. From the very beginning of this breaking story, it all smelled too much like a contrived situation with an agenda.

Using incidents like this has been historically common place. For those who still have the ability to think and reason, the operating Marxist/Communist people and organizations have deliberately, and with malice, created circumstances to escalate chaos, division, and hatred between races. Especially since the 1964 Civil Rights Act and the advent of MLK to force the equalization and integration at every level between Negroes and Whites, including affirmative actions policies, racial tensions have increased. But the common reason that is always promoted is that it is always the White People’s fault.

They are the ones who are the problem. They create and sustain “systemic racism” and oppress the Negro. “Social injustice” toward Negroes is, and always has been, the White sin which must be decisively dealt with at all costs. That’s the common theme.

What timing now for this George Floyd incident to take place just on the heels of the fake Covid-19 “plandemic” and the unjustifiable lockdown of the entire country, as well as many others around the globe. What incredible pressure has been brought to bear on our People and everyone else that really cannot be measured. The stress that it has caused people personally and financially will be the subject of future sociological studies. To add to this scenario, now comes the purported killing of George Floyd by a White police officer – all filmed on location for at least eight minutes.

The White officer and the other three non-White officers were immediately condemned, arrested, charged with various murder charges and, of course, immediately convicted by the news media and government, among others. There will be no “innocent until proven guilty” for any of these involved, no matter what the facts are. On the other hand, there have been reports with some evidence that all the above are “crisis actors” and not really police officers at all, and not even Floyd was killed. Most likely this story is yet to unfold in more definitive detail.1

Now we are getting information from video footage that raises a whole bunch of questions about what took place during this episode. One video showed a Negro male was apparently lifeless, the White office removed his knee off his neck, an EMT truck rolled up, and two cops got out of the truck and slapped this guy on a gurney and put him in the truck. No paramedics. No routine check for vital signs or other onsite medical attention. And there are other videos.1

Here is a list of questions that have not been answered, or probably will never be addressed and answered:

It all reeks of a set-up job!

As you probably know, there have been numerous, destructive and violent protests and riots around the country, and in other countries, spontaneously taking place at the same time all because of this Floyd incident. Spontaneously or planned?

Terrorist groups like Antifa and Black Lives Matter, and an assortment of white-looking people have been given a pass to reck havoc anywhere they want. What is disturbing, but not surprising, is that these groups perpetrating unlawful acts of destruction of property, looting and murder have been aided and abetted by hidden actors including financiers and even some law enforcement (in some cases). We do know that pallets of bricks have been strategically delivered for these hooligans to use to smash windows and for other destructive purposes.

Now we have government officials praising the protests and even joining them “in solidarity” like the Mayor of Los Angeles. LA is still on lockdown and yet, street protests continue unabated with the mayor approving. And, by the way, there is no need for masks or social distancing. The so-called protestors and the mayor get a pass on that, too.

What is most disgusting is the slough of mindless, knee-jerk reactions from corporations and businesses and celebrities of all sorts who are happy to take advantage of their hatred toward White People and their total commitment to advance and promote tolerance and diversity at the expense of the truth. For example, one sign I saw read, “White people – Do something.”

Amazon came out with this:

Amazon stands in solidarity with the Black community

. . . followed by a series of free-to-watch civil rights and racial injustice documentaries favoring the Negros, of course, and always vilifying Whites.

I am on several email lists of alternative health organizations in which I have received something like the following:

Over the past week, we've been working with many leaders in the integrative and mental health fields to develop a collective statement, "Healing Our Nation: Addressing Systematic Trauma with People of Color."

We fundamentally believe that all people must be treated with respect, dignity, and humanity. We believe black lives matter. As white founders from middle class families, we acknowledge that we have benefited in many ways from our race, class, and able-bodied privilege.… It is our responsibility and work to listen … and actively support dismantling systemic racism.

And here is a sample of more pro-Negro headlines from an insurance company:

Ways You Can Donate to Support Communities of Color

Particularly nauseating was the recent post from the popular online magazine Christianity Today (CT). Let me share some of the headlines from various articles:

Do White Evangelicals Love Police More Than Their Neighbors?

Singing the Songs of Injustice

A Soul Check for White Christians

White Pastors: Our Decision to Show Up Matters

And then this picture a few days later from CT: 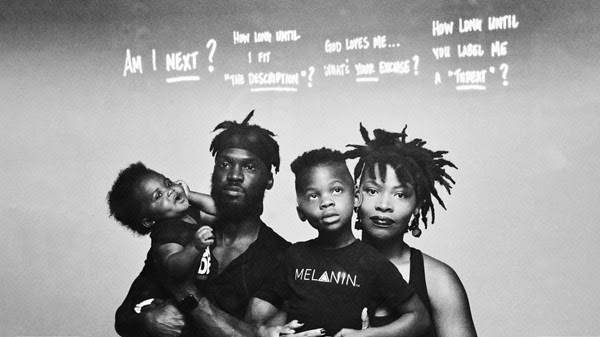 White guilt, baby. That is what conventional, but errant, evangelical Christianity is all about. This is the agenda!

And there have been numerous displays featuring White people kneeling before Negros to beg forgiveness and kissing their feet – literally. You can probably find pictures of this sort of thing through an internet search.

Well, this is the product of the years of government schools run by Marxists and culturally-sensitive churches.

Once again, the whole Floyd thing is a sham. Don’t fall for it.

The biblical solution to this racial conflict is separation. Let the White People have their own land governed by their people under their system of laws. Same for the Negros. Same for the Asians. Same for everybody else.

Racial and multicultural integration doesn’t work. Never has and never will.

Next up: You Can Make an Impact for the Kingdom: This May Help