Book Five: The Greatest Deception of Our Time 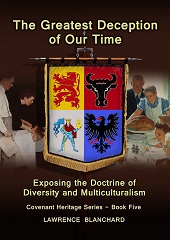 $32.35 including shipping and handling

The Greatest Deception of Our Time: Exposing the Doctrine of Diversity and Multiculturalism reveals the ultimate value and highest ideal of our time which is racial and cultural diversity. It is the sacred mantra obsessively promoted and pursued by government, the media, educational institutions, businesses, religious leaders and their organizations – both conservative and liberal.

It seems anybody and everybody is on the bandwagon trumpeting the virtues of racial and cultural integration at all levels of modern society. So, how could such a thing be wrong because, well, everybody seems to agree that it’s a good thing. It’s just and fair. You know, equal rights for all. Let’s just get along. Can’t we just co-exist, you know, like the bumper sticker: “coexist”?

Come on, get on board. Don’t be left behind. It’s the right thing to do! After all, how can it be wrong, when it feels so good?

Of course, should you voice your disapproval of the majority opinion of racial and cultural diversity, shame on you! You must be a good-for-nothing “racist.” You must be a hateful “White supremacist.” And if you don’t apologize, you will lose your job and your reputation and probably your friends. So beware! Just repent and you will be forgiven – maybe.

Get the picture? Sound familiar? Of course it does. It’s the modern racial and cultural diversity movement that has swept over our land like a tsunami, destroying everything and anyone who gets in its way.

Is it good and right? Is it of God? Or, is it the greatest deception of our time?

The Greatest Deception of Our Time

Well researched, hard-hitting and written in a “take no prisoners” style, Book Five, The Greatest Deception of Our Time, attempts to set the record straight.

Do you want to be informed and read another side of the story? Don’t be deceived any longer! Get the facts. Get the truth and be transformed by the renewing of your mind.

Go to our Home page, look at the right-hand column and sign up today if you have not done so already to download your free Introduction of The Greatest Deception of Our Time.

In the meantime, here are some of the questions that will be answered in The Greatest Deception of Our Time:

To order this book click this link:  YourBiblicalHeritage.com Store